Human Evolution
Biological evolution is the changes in genetic information as it is passed from one generation to the next.

Bipedalism, The Skull, The Hand

Comparison between apes and modern humans 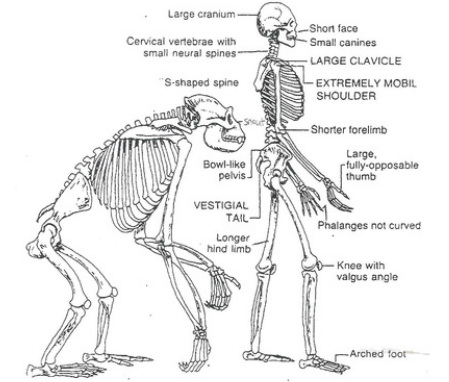 Changes is skull and endocranial features 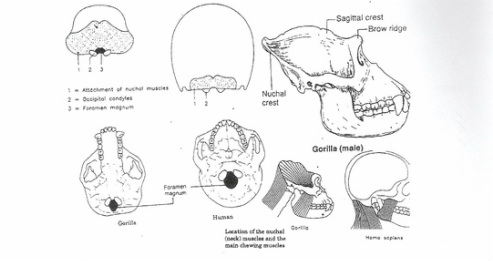 Changes in the manipulative ability of the hand

There are a number of possible theories relating to why human ancestors became primarily bipedal in their gait. These include:

Advantages of Bipedalism vs Disadvantages

Evolution of the Brain 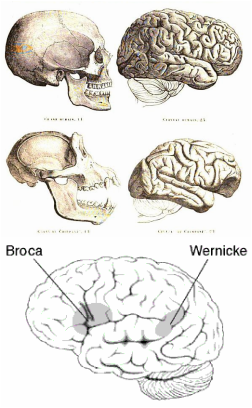 As a general rule, all apes and humans share the same basic pattern of brain configuration.
The size of the brain is important for two reasons. A bigger brain has:
It is not just a question of bigger brains, but better ones. Humans have increased the outer brain cortical tissue area (the cerebrum) and increased (by 40%) the amount of infolding. This increases the surface area of the brain.
Fontal lobes-
Particularly well developed in humans. This is the seat of imagination, memory, creativity and abstract thought.
Speech-
Two areas of the brain work together to make human speech and language possible:
Brain development and bipedalism-
The cerebellum, responsible for balance and fine motor skills, would develop with bipedalism.  Being able to interact more fully with objects could promote the development of the brain, resulting in a larger brain and more folding, as those that could make and use more complex tools were more likely to get enough food to survive.Brain development and food-
Although the brain makes up only 2% of our body weight, it demands about 20% of the body's metabolic energy at rest. In order for the brain to further develop in size, a more energy and nutrient rich diet is required. This required the ability to obtain a more reliable food source of meat (as meat is a better source of protein and energy than tough plant matter). Cooking food would have supplied a better quality of food, as well as hunting and tool development supplying a bigger quantity of meat.

Uncertainty about Human Evolution
The Australopithecines